Jarflo is the premier name in roll form tapping. Our innovative designs are used for a wide variety of applications including engine components, fasteners, spin-on oil filters, sucker rod couplings, and in-die tapping. Jarflo’s are produced with ground radius crests designed to reduce torque requirements by as much as 50%.

Jarvis can optimize Jarflo designs utilizing variations in the number of lobes and lube grooves, variable cutdown lengths, and controlled minor diameters to maximize productivity and provide the lowest cost-per-hole.

The difference between form taps and cutting taps is important to note out of the gate. Forming taps displace the metal/material, while cutting taps on the other hand remove the material. At Jarvis Cutting Tools we’ve named our line of forming taps the Jarflo series.

From leveling fixtures, to cover, to assembly brackets, they all have tapped holes that need a cost effective solution. Jarvis provide industry leading cost-per-hole solutions for a wide variety of industrial customers.

And, Jarvis knows automotive. From fasteners to seat components, we have experience in all different parts and materials.

If you need In-Die Taps, Jarvis Cutting Tools is your manufacturer for in-die tapping! 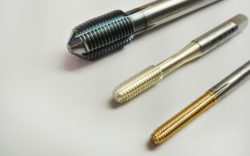 You will not find any forming taps (Jarflo’s) that work as well as ours! Jarvis Cutting Tools has the ability to grind either a crest flat or a crest radius. Traditionally, taps are produced with crest flats. This truncated thread form works the best in some applications, but Jarvis ground crest radius has significant advantage in a wide variety of applications. The crest radius provides an edge prep for forming taps. The rounded shoulders can dramatically increase tap life and create much stronger threads. In fact, there are many applications, which now specify Jarvis’ crest radius because of the extra strength they provide.

Some of the benefits of form tapping include:

Chipless tapping: Since the thread is formed and not cut, there are no chips to interfere with the tapping process or to cause chip-removal problems in blind holes. This enables cleaner holes with improved surface finish.

Longer tap life: Jarvis’ industry-leading forming taps last 3 to 20 times longer than cutting taps because they have no cutting edge to dull. This leads to cost savings and greater returns, which in the end equals a stronger hold and a bolstered bottom line. Both are sound business practices.

Stronger threads: The grain flow of formed threads – as a result of form tapping – follows the contour of the thread resulting in greater thread strength.

Better thread gaging: Forming taps rearranges the metal in the hole to create the thread. Because no metal is cut away, the possibility of producing oversized threads is greatly reduced.

Jarflo is the premier name in roll form tapping. Our innovative designs are used for a wide variety if applications including:

Jarvis can optimize Jarflo forming tap designs utilizing variations in the number of lobes and lube grooves, variable cutdown lengths, and controlled minor diameters to maximize productivity and provide the lowest cost-per-hole. In fact, according to the most recent 2017 USCTI Data, over 25% of the US Market uses our form taps for their applications.

Our customers need a competitive advantage, and gaining an advantage in this competitive industry is not easy. It requires work, discipline, and more work. It requires both you (aka the customer) and us (aka the supplier) to define the objective, test the options, measure the results, and implement the solution. Standard catalog items can take you only part of the way; why not experience an exclusive solution?

With that in mind, Jarvis’ exclusive tooling solutions have been continuously proven to reach far beyond the performance of the tools you are using now. Contact us today to set up a free consultation and (if applicable) trial period to help cultivate the exact tool you need to achieve a competitive advantage. Who can’t benefit from that?